Stride & Ride: Part 1 What It Is and Why We Are Doing It

Register For Your Stage

A multi-state 911 mile long distance relay that is broken up into108 stages/legs for runners, ruckers/walkers, cyclists and motorcyclists, which takes place along the Northeast corridor, relaying to every major 9/11 memorial point from Boston, New York, Pennsylvania, and Virginia.

The focus of this event is to honor and remember the October 7, 2001 deployment of our Military Men & Women post 9/11. Paying tribute to those still serving, those who have paid the ultimate sacrifice, our Veterans, and the military Men and Women we lose due to PTSD and the Invisible Wounds of War.

It’s about individuals and teams coming together to help the Stride & Ride Tactical Team conquer stages over eight days, seven nights and accomplishing something we could never to alone. Each stage is about uniting together, overcoming fears, reaching outside your comfort zone to progress through running, rucking, walking, cycling or riding a motorcycle with the intention of doing something greater than yourself by reaching the target points for your chosen leg. From an avid runner to the generally active walker, from carrying the weight of their sacrifice by rucking to cycling the day or night away or simply sitting back and riding the open road, Stride & Ride is the perfect relay for because it has activities for anyone.

Together we will honor and remember all of our Military Men and Women who so willingly left the safety of their homes to serve our country doing so to this very day, while giving thanks to our Veterans, First Responders and pay our respects to the 2,977 lives lost on 9/11.

To look at the different stages and or join a stage click on this link http://www.strideandride.com/run.asp

The Tactical Team is a group of people from Military Veterans, First Responders to Civilian Patriots who are volunteering their time for eight days to help fill unfilled states, as well as the driving. Live news feeds via social media, handing out waters, challenge coins, taking photos, and cheering other participants on. This is a team of people who believe in the mission, what it stands for and the military charities it supports.

Read their stories in their own words at: http://www.strideandride.com/Stride--Ride-Tactical-Team-c-88.asp

Back to Information and Support 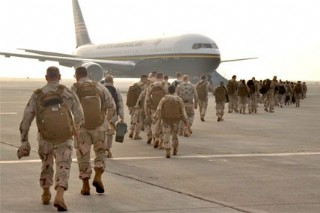 What is October 7th?

And the fight is not over………

We are currently in our 15th+ year of war, where each day our men and women continue to serve and preserve the freedoms we enjoy. Not only did we lose 2,977 lives on September 11th, but over 6,000 men and women who have paid the ultimate sacrifice, with many of our Veterans returning home from battle suffering from the physical and psychological wounds of war.

Information about the 9/11 Memorials at http://www.strideandride.com/Memorials--c-84.asp 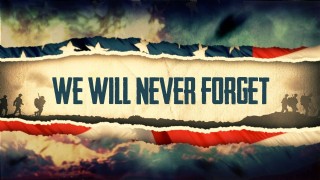 The Boston Logan International Airport 9/11 Memorial is a place of reflection and remembrance for all those affected by the events of September 11, 2001. The Airport 9/11 Memorial honors the passengers and crews of American Airlines Flight 11 and United Airlines Flight 175, which departed Logan Airport that morning for Los Angeles. The Memorial also commemorates the dedication to duty of the Logan Airport community in 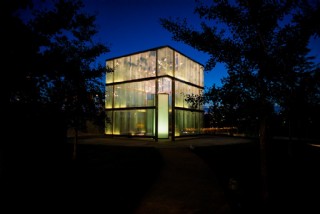 restoring the aviation system to full operation and the contributions its member made toward comforting the families of the passengers and crew who ere aboard those flights. The Memorial site is anchored by a large glass sculpture that encases two glass panels etched with the names of the passengers and crew of each flight The landscape has echoes of New England these with stone walls and trees that will turn bright yellow each autumn. The Airport 9/11 Memorial dedication was held on September 9, 2008. The Memorial site is open to all 24-hours a day, seven day a week. 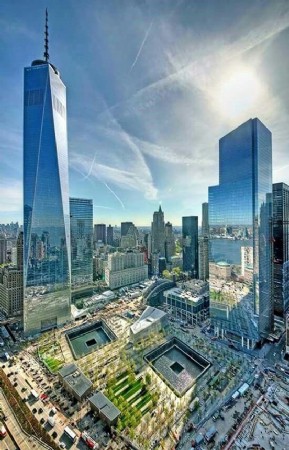 The Memorial’s twin reflecting pools are each nearly an acre in size and feature the largest manmade waterfalls in North America. The pools sit within the footprints where the Twin Towers once stood. The names of every person who died in the 2001 and 1993 attacks are inscribed into bronze panels edging the Memorial pools, a powerful reminder of the largest loss of life resulting from a foreign attack on American soil and the greatest single loss of rescue personnel in American history.

“A common field one day. A field of honor forever.”

The Memorial Plaza marks the edge of the crash site, which is the final resting place of the passengers and crew. It consists of various elements including the Wall of Names and is a self-guided experience. Interpretive panels provide an overview of the story and a cell phone/mobile tour provides for more in-depth exploration. There is a parking area and restrooms. Allée and Western Overlook trailheads are located here. 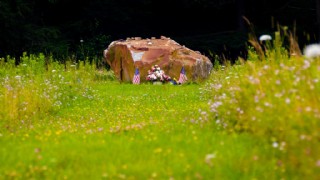 The Pentagon Memorial captures that moment in time at 9:37 a.m. when 184 lives became intertwined for eternity. Each victim’s age and location at the time of the attack have been permanently inscribed into the Memorial by the unique placement and direction of each of the 184 Memorial Units. Elegant and simple, the Pentagon Memorial serves as a timeline of the victims’ ages, spanning from the youngest victim, three-year old Dana Falkenberg, who was onboard American Airlines Flight 77, to the oldest, John D. Yamnicky, 71, a Navy Veteran, also aboard Flight 77 that morning.

The 184 Memorial Units within the Pentagon Memorial are located on the age line according to the year the victim was born. The age lines, denoted by stainless steel strips that cross the Memorial beginning at the zero line, which spans from the Gateway to the entrance of the Memorial, Etched into the granite zero line is the date and time of the attack: “SEPTEMBER 11, 2001 9:37 A.M.” Visitors to the Memorial may look up a victim’s name and birth year on the locator stone within the Pentagon Memorial Gateway. On age lines with multiple victims, the Memorial Units are organized by birth date along that line. 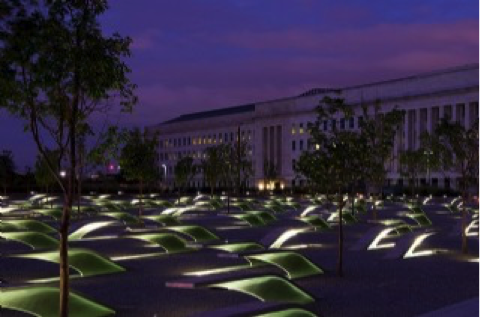 Each Memorial Unit is a cantilevered bench, a lighted pool of flowing water, and a permanent tribute, by name to each victim in one single element. Each Memorial bench is made of stainless steel and inlaid with smooth granite. Each Memorial Unit contains a pool of water, reflecting light in the evening onto the bench and surrounding gravel field. Each Memorial Unit is also specifically positioned in the Memorial to distinguish victim’s who were in the Pentagon from those who were on board American Airlines Flight 77. At the 125 Memorial Units honoring the victims of the Pentagon, visitors see the victim’s name and the Pentagon in the same view. At the Memorial Units honoring the 59 lives lost on Flight 77, the visitor sees the victim’s name and the direction of the planes approach in the same view. Victims from the same family are linked by a plaque a the end of the pool of water, which lists their family members who also died in the attack, forever binding the family together.

Within the Pentagon Memorial, 85 Crape Myrtles are clustered around the Memorial Units, but are not dedicated to any one victim. These trees will grow up to 30 feet to provide a canopy of shade over the Memorial for years to come. The Memorial’s stabilized gravel surface is bordered on the western edge by an Age Wall. The Age Wall grows one inch per year in height above the perimeter bench relative to the age lines. As visitors move through the Memorial, the wall gets higher growing from three inches (the age of Dana Falkenberg) to 71 inches (the age of John D. Yamnicky). The Age Wall draws the eye to the Memorial for drivers passing by on Washington Boulevard and the adjacent Arlington County Bike Path, while ensuring solitude for visitors. Ornamental grasses mark the boundaries of the Memorial. 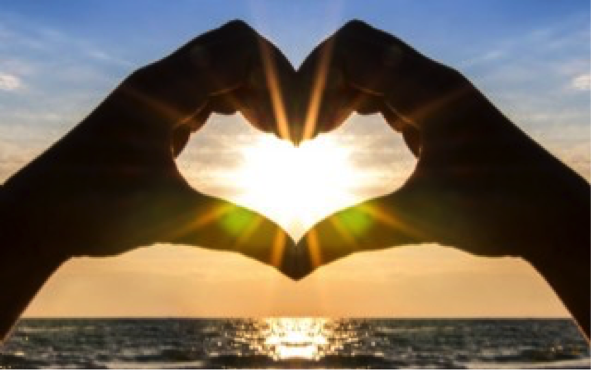 Stride & Ride will be giving back all proceeds to Military Charities that do amazing work with Gold Star Families whom lost a loved one in military service, Wounded Veterans, Active Duty Military, Veterans and their families. Help us raise money and awareness for these amazing charities; one mile, one stage at a time and Together We can Help those in need.

The Military Friends Foundation recognizes the unique contributions and sacrifices made by the Massachusetts National Guard, Reservists, and Families of the Fallen. We are proud to offer grant programs, community events, referral services and more to Families who have faced hardships related to active service. We invite you to Join Us and Honor Them. 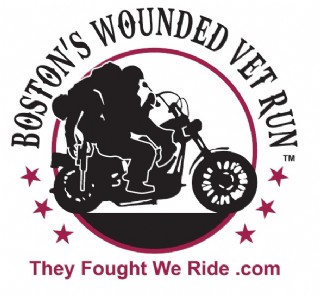 Boston’s Wounded Vet Run is dedicated to caring for Veterans in many ways. All proceeds raised go toward housing modifications to create comfortable living for disabled Veterans. Funds are also used to improve the quality of life of disabled Veterans, fulfill recreational needs, and provide cars and basic living requirements. They fought and we ride; a bike run honoring the wounded Veteran’s. 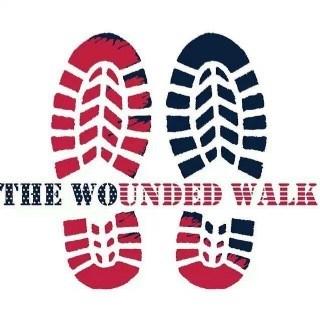 The Wounded Walk is a nonprofit organization located in Leesburg, VA. This orgnization's goal is to create experiences that empower physically and mentally wounded Veterans to help themselves and others by challenging them and motivating by leading wilderness excursions, camping treks, and mountaineering expeditions. The Wounded Walk also advocates for post-combat treatment for Wounded Veterans.

If you have any questions, we’re here to help. Simply message us via any one of these methods: 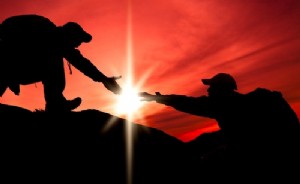 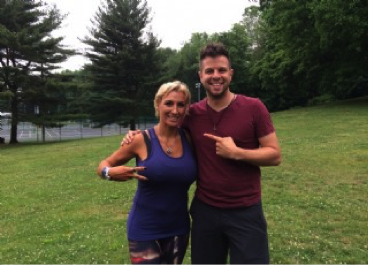 Back to Information and Support

Thanks to our Supporters & Participants 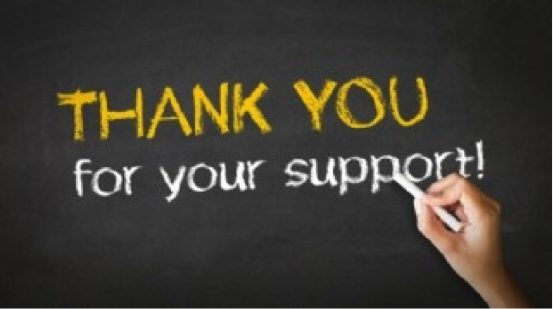 Thanks To All Who Support the Mission

Thank you for the amazing support toward this mission. Funds raised allow Run Anyway Foundation to grow its vision and execute the Stride & Ride Relay mission, as well as raise awareness of and give back to our nonprofit partners. Without it, we could not complete our mission of honoring those who serve and give back to charities who help our Military Men and Women. Many people, organizations, and businesses have donated gifts of goods, services, products, and their time and money to help us keep costs low, so we can give back as much as possible to the benefiting charities. We truly appreciate you all:

Read more about these organizations at http://www.strideandride.com/Who-We-Are-c-55.asp 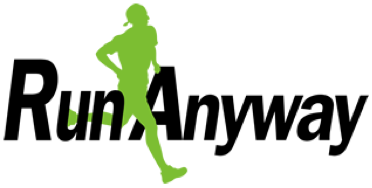