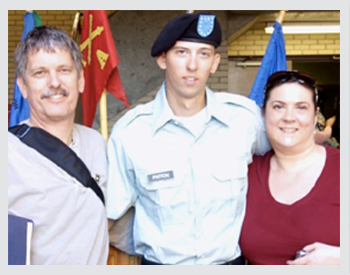 Matthew joined the Army in 2008 after graduating from Mount Hope High School (MHHS). Matthew served for almost five years, including a deployment to Afghanistan from October 2009 to October 2010. Matthew had a significant mental health history during adolescence and his depression did return shortly after joining the Army.

Matthew faced several horrific experiences during his deployment that resulted in survivor’s guilt and PTSD symptoms that would have eventually resulted in a PTSD diagnosis had he been seen by appropriate physicians in a timely manner. Unfortunately, Matthew turned to substance use to cope with his symptoms and he died by suicide May 13, 2013.  He only had six months left to serve and would have been home on terminal leave in four months.

After a very difficult year and after speaking to many Soldiers through multiple venues, including 400 Soldiers at Fort Hood, John and I decided that we needed to help prevent this from happening to another family's Matthew. We created the Matthew Patton Foundation (MPF) so we can gather information directly from active-duty and Veteran Service members, and their Families, about their mental health needs, potential solutions they identify, and what they think is working well. We plan to use this information to improve the military mental health system as well as educate and advocate for all Service members to ensure their needs are met. We created MPF to help us survive losing Matthew. We want to celebrate his life and honor his memory, rather than mourn his death. We also do this to honor the lives and memories of all Service members who have lost their battle to suicide.

Lynn worked as a staff nurse at Woman and Infants Hospital in the LDR, ER, and IVF for a total of 12 years. During her time in the ER, at the request of the Vice President of Patient Services, she represented ER nurses by serving on a committee evaluating the hospital’s plan to expand the ER.  She also precepted new ER nurses. After her time at Woman and Infants Hospital, Lynn became certified as a personal trainer specializing in fall prevention. She owned her own business balance training elder women in their homes for eight years. She received her BA and BSN from Rhode Island College in 1989 and 1993, respectively, and her MHA from the University of Phoenix in 2014. She was an ACE-certified personal trainer from 2006 to 2014.

Lynn has been married to John Patton for 30 years. They have lived in Bristol, RI with their four children for 21 years. Her son SGT Matthew Patton served in the Army for five years with one tour to Afghanistan October 2009 to October 2010. Matthew returned home a different person and he lost his battle to the invisible wounds of war May 13, 2013. Losing Matthew this way serves as her primary motivator to improve the military mental health system and prevent suicide. She is also deeply influenced by active-duty and Veteran Service members who entrust her with their stories and the moving responses she evokes when telling Matthew’s story to Soldiers. All fuel her desire to help each and every Service member achieve their best mental health state, and prevent suicide, through individual effort and MPF.

John W. Patton is the Torpedo Chief Engineer in the Weapons, Undersea Vehicles and Defensive Systems Department at the Naval Undersea Warfare Center Division, Newport.  He has technical oversight of development and operations for all US Navy torpedoes, ranging from defining requirements to continuous assessment of performance.  He has been involved in torpedo design, development and testing for over 30 years.  John has also volunteered as treasurer for the Rockwell School PTO, the Bristol Highlands Improvement Association, and the NUWC Golf League.  He holds a BS in Computer and Systems Engineering from Rensselaer Polytechnic Institute and a Master of Business Administration from the University of Rhode Island.

Like Lynn, John wants to reduce the stigma that accompanies the invisible wounds of war.  Providing our Soldiers with the information they need to understand the relationships between Traumatic Brain Injury, Post-Traumatic Stress Disorder, Depression and Sleep Disorder; and to encourage them to seek help with any/all of these conditions is one of the Foundations objectives.

Chairman of the Board

Evan, Matthew’s oldest brother, completed a Doctor of Philosophy degree in Computer Science at Rensselaer Polytechnic Institute. He has worked on sponsored research related to social media-powered recommendation systems, environmental informatics, patient health information management, and functional metagenomics. His Ph.D. research focused on techniques for energy-efficient knowledge representation for smartphones. Evan currently serves as Chairman of the Board of Directors for the Matthew Patton Foundation.

Belinda has worked in business administration for over 20 years including the automotive, oil & gas, and rental property industries. She has also worked as a caregiver for the elderly for 2 ½ years where she provided care in the family’s home. She attended to their daily business affairs, medical treatments, doctor appointments, physical therapy and personal hygiene. Belinda received her BA in Legal Assistant from Baton Rouge School of Computers in 2002. She is a certified caregiver through Easter Seals. She was a certified Emergency Care Attendant for the State of Texas. She has also served as a volunteer firefighter.

Belinda has been married to Dan Formento for 4 years. They currently reside in Ruston, LA.  Her husband served in the Army for eight years with several deployments to Iraq before medically retiring due to MS and PTSD.  She has been instrumental and successful in researching and filing both Social Security and VA claims for benefits.  They have a blended family of five children. Belinda’s son is currently active duty Navy. Through her experiences as an Army wife, Navy mom, and her family’s friendship with Matthew Patton and the Patton family, she is inspired to assist active duty and Veteran Service members receive the benefits, mental health care, and suicide prevention they deserve.

Kyle, a United States Army SGT served 10 years until he was medically retired as a result of sustaining multiple injuries from both military and combat experiences. Kyle did three tours overseas; two in Iraq and one in Afghanistan. Kyle worked with many Soldiers and Veterans during his service to overcome any issues they endured. Kyle served with Matthew Patton in Germany and Afghanistan. He was Matthew’s NCO while in Germany and was there for him whenever Matthew needed help. Kyle continues to have a deep passion to help Soldiers and Veterans, so he is always available to provide whatever help they need when they call him. He wants people to understand that Veterans and Soldiers who are suffering from PTSD, and other mental health issues, do need the help they deserve and were promised. One of his quotes includes this; “remember not all wounds are visible.”

Kyle is currently living in Louisiana  He is married and has two daughters.

Dawn spent eight years in the United States Marine Corps in multiple capacities. She transferred to the Air Force working as a Medical Administration Technician. Dawn was medically retired in 2006. She then used her VA Benefits to attain her BS and her Post 9/11 GI bill to complete her MS with an emphasis in Human Resources. She completed 68 hours in her PhD program. Dawn has an extensive and diverse military and civilian background. Dawn is a former employee of the Veterans Administration as a Patient Advocate and gained a strong understanding of the inner workings of the VA as she advocated for Veterans.

Dawn currently resides in Georgia with her husband USMC/USAF RET. Her son is currently Active Duty in the Navy. Dawn remains active with the military community working as an administrator on several military Facebook pages for mothers of Service members.

A retired Medical Service Corps Officer, Healthcare Administrator, Robin served 30 years in the United States Navy. She served the first 14 years as a Hospital Corpsman before completing her Bachelor’s Degree in Heathcare Management from Southern Illinois University and selection for a commission as an Ensign in the Medical Service Corps.  Her background includes Military Personnel Officer, Plans, Operation, and Military Operations Officer, Command Legal Officer, Emergency Management Coordinator, and Master Training Specialist.  Robin holds a Master’s Degree in Adult Education from the University of Rhode Island and a Master’s Degree in Administration of Justice and Homeland Security from Salve Regina University. She is most importantly the mother of Rob Guzzo a former Navy SEAL who lost his battle with PTSD and TBI on Veterans Day 2012.  She is the administrator for the Rob Guzzo Memorial Facebook page and is an active Veteran Advocate.

Dan, a United States Army SGT served 9 years until he was medically retired after being diagnosed with Multiple Sclerosis.  He was diagnosed with PTSD after his medical retirement.  He did two tours to Iraq.  He served with Matthew Patton at Fort Hood TX.  He was Matthew's squad leader.  He was there for Matthew and Matthew was there for him as well.  Dan understands what it's like to go through the battles of physical and mental health issues.  He is always available to talk and listen as well.  He understands the struggles of going from a proud Soldier to being in a wheelchair and the feelings of worthlessness.  He would like Veterans and Active duty personnel to understand that they earned and deserve proper benefits, mental and physical health care, and evidence-based suicide prevention.

Dan currently resides in Florida with his wife.  He continues to be active through the PVA and VA adaptive sports programs.

Why we are different

We will give active-duty and Veteran Service members the opportunity to identify, with 99% anonymity, the military mental health system problems they are experiencing and work to find solutions. We will achieve this by giving them a safe and nurturing environment to tell their stories. We will ask them for practical solutions as well as successful programs they have seen for potential adaptation to other areas. We will also work in concert with other nonprofits working toward similar goals.

For Active-Duty and Veteran Service Members, and your Families…..

We value honoring the promises made to You.